Colors - It's more complicated than you think

How is color space defined and what exactly is “color” from a machine’s point of view.

The three types of cones S,M and L have different sensitivity curve (function) against wave length. Any perceptual color can be described by the stimilus level of the three cones.

For a light source, described by wavelength-intensity function $\phi(\lambda)$, the perception can be described by tristimulus. A 3-tuple of integration.

The L,M and S functions, are standarlized into “standard observer”, R,G and B, then transformed into X,Y and Z.. This is a little tricky but the important thing in mind, is the concept of tristumulus. 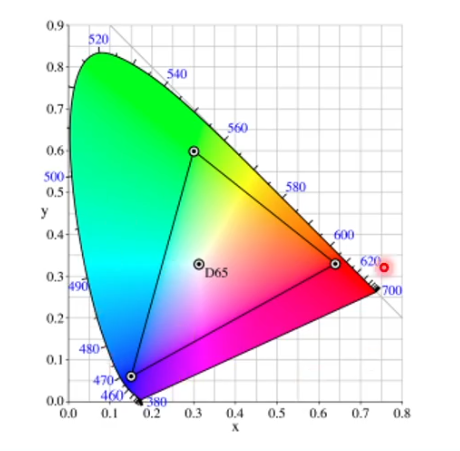 For a display device with three primaries, say red, green, and blue, we can mea- sure the spectral composition of the emitted light by sending the color vectors (1, 0, 0), (0, 1, 0), and (0, 0, 1). These vectors represent the three cases namely where one of the primaries is full on, and the other two are off. From the measured spectral output, we can then compute the corresponding chromaticity coordinates (xR , yR), (xG , yG ), and (xB , yB ).

The white point of a display is defined as the spectrum emitted when the color vector (1, 1, 1) is sent to the display. Its corresponding chromaticity coordinate is (xW , yW ). The three primaries and the white point characterize the display and are each required to construct a transformation matrix between the display’s color space and CIE XYZ.

Each device has its own primitives (R,G and B) therefore the RGB specifiction is device dependent.

sRGB is a device independent description, is a smaller subset of XYZ space (and of most device’s RGB space). 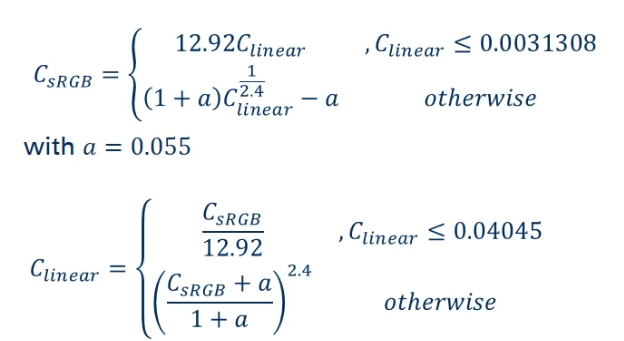 Monitors are nonlinear with respect to input: this nonlinearity is characterized by a $\gamma$ value.

HOWEVER, WE WANT the desplayed Intensity to be a*MaxIntensity, there fore we need to find the monitors’ gamma and set